by Arise in Chaos 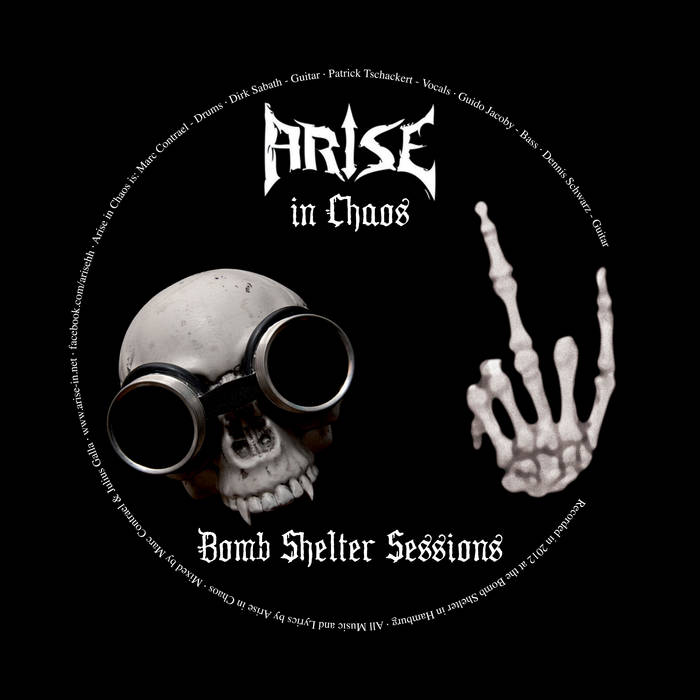 Established in Aachen (Germany) in 2004. After rockin' Aachen & environs the band was dismissed in 2007. In 2010 the 2 founder members Marc (Drums/Songwriting) and Dirk (guitar) resurrected the band in Hamburg. In the following 2 years the band was completed through Patrick (Vocals), Guido (Bass/
Background Vocals) and Dennis (Guitar).
In 2012 they released their Album "Bombshelter Sessions" ... more

Track Name: Demon Rider
I’m Decay and Misery
Every living thing fears me
Collect the Heads of enemies
I have kings on bended knees

(Chorus:)
I am your punishment (2x)
Demon Rider
I will make you repent (2x)
flying’ higher

I’m deceit, and I am lies
No soul behind my eyes
I cheat and I divide
Straight out of hell I ride

I’m perversion I bring shame
Righteous men curse my name
Know your nightmares and your dreams
Know your weakness make you scream
Track Name: Death Injection
Can you take it all It's a fucking Deathbowl
No regret at all Execute & head shoot
I'm gonna shoot 'em all It's a fucking nightmare
I gotta find my way The evil side in me

Death injection is running through your veins
Seconds of your life is what remains
Staring at the end, ready to die
All you stood for, just a fucking lie

Death injection is running through your veins
Seconds of your life is what remains
Staring to the end, ready to die
All you stood for, just a fucking lie

I'm gonna spill your blood I'm a fucking death God
I would kill myself Just to see you die
I don't kill for greed Hate is all I need
I'm gonna crush your head Fear this day, you're dead, fucker


You'll never see the light Death delivers you tonight
I push the needle in Prepare yourself to die
No one helps you out No one hears your cries
Feel it kill your brain Forever die in pain, motherfucker

(Chorus)
Track Name: Warminded
Plans for life and plans for death
Black or white, right or wrong
Cold and dark but even so strong
The bloodshed starts, we kick some ass
The cluster fucked more and more
We'll let 'em die, eye to eye, say goodbye

In your dreams and memories - you seek yourself, you prayed for peace
In your time of war and pain - you've gone insane, warminded

Young and old, alive or dead
Child or man, get on the gun
Slave or master free to be
Pain and sorrow but no one sees
Run for life or crawl for death
Home or lost, they’re counting tags
Heaven, hell, sinner and saint
Blameless you feel, innocent you ain't
No way back, Blessed or damned
Kill for them and die for pride, say goodbye

(Chorus)
Track Name: Times of hate beyond my fate
My choice is made I believe in my fate
Why are you so afraid of what you fucking hate
Something keeps me alive - It's the sound of hell

I was blind, but now I see
There were times I wasn't me
Ruled by hate and misery
Eternal fuel for synergy
I couldn't tell right from wrong
I paid the price 'till I scraped along
My crazy mind was running around
No more me to be found

Escaped to reach all the better days
I hit the ground in a poisonous haze
I sucked the venom out of my vein
And I got up again
No more hate messed me around
Turned into rage, my mind unbound
I Felt so free which I can't explain,
One thing's for sure, it will remain

(Chorus)
Track Name: To be or not to be
Home alone in a comatose state
No will or power to set yourself straight
Generic blather from you TV set
You're getting screwed can you see it yet

Hate for the Heart, Fast food for the mind
Better compliance if we're all blind
Matter of fact is we sleep and they live
They've taken everything this world can give
It's all you hear, lies, death and disease
They're in control and they do what they please
All the power suffocates your soul
We're being buried in an endless hole

You're getting fucked every day of the week
Your fuel ran out, and your gut sprang a leak
Ask yourself, do you really give a shit
How many times have you wanted to quit
It's all you hear, lies, death and disease
They're in control and they do what they please
All the power suffocates your soul
We're being buried in an endless hole


(2x Chorus)
Track Name: From edge to edge
Back off you liar, 'Cause we won't misfire
We're raising our fists, You won't enslave us
Destroying the world and holding us down
We’re crushing your root, Devastate you
System has failed, Crumbling down
No Justice, No peace, Born to rage
Tear out your spine, Do time for your crime
Instinct to fight, We won't rest

(Chorus:)
They’re creeping & dying & crawling from edge to the edge
‘Cuz they’re killing and lying dissecting the poor from the rich
Freezing and staring awaiting their hell with the dead
Smashing and thrashing and crushing the sledge from the
… Edge to the Edge


One with myself and no one with you
Too many times You spoke the lies
Loading my gun, it’s senseless to run
We’re raging unbound, you will feel
Spread like the Plague, exploiting the earth
Destroy and create, bring it on
Fighting for life or killing to live
Dying for me that’s your fate


No way back for us, No way out for you
We'll skin you alive if we ever get you
You festered too long, been draining our life
Now you can line up to be judged by the knife
Thousandfold hate sweeping your states
Oppression we end once and for all
You should have let up you should have backed down
Now it's too late and we seal your fate

(Chorus)
Track Name: Roadkill
We slide it down the fucking razor's edge
You cannot control what the hell we do
One lesson to learn, that's never looking back

We're taking over this motherfucking town
We'll burn your house, you can watch it going down
You can't escape what's coming after you

from the back to the front
from the left to the right
everybody just jump the fuck up!
… 'cause we were born to kill
Track Name: Thunderfuck
Ignite the fuse, we ain't got time to lose
Flames they set you free it's my mile high liberty
Are we travelling or is the road just moving
Are we listening 'cuz I can hear

I'm just telling you about the one I'm seeing
Makes your delusions true, we're dancing on the ceiling
Are we trippin', or is the planet grooving
Sometimes I'm paranoid about everyone

I am the earth, I am the stars
One billion years, one fucking billion stars
I ride the morning star into eternity
Releasing ancient gods from captivity

...feed them just for me

Bandcamp Daily  your guide to the world of Bandcamp

Guests include Kassa Overall and Muriel Grossman, plus an LP of the week by Van Hunt.